We are very excited to announce that from now on the European Journal for Theatre and Performance will be published twice a year.

Our Essay Section will from now on alternate between a themed one and an open one. Next issue no. 5 will present scholarly work around such different topics as the use of the mask in Giorgio Strehler’s Il servitore di due padroni; the uncomfortable memory of Germany’s Nazi past in conjunction with the colonial construction of human zoos in Oliver Frljić production of Kafka’s Ein Bericht für eine Akademie; the understanding of how images work as instruments of transmission of memory, starting from the pictures of Isadora Duncan; and the complex question of the construction of history, as Walid Raad demonstrates in his performances around the wars in Lebanon and the Middle East. A common thread, although not originally intended, is the crossroads between memory, the body, and the archive. The urge for searching and understanding ‘performance remains’ (Schneider) has only grown in recent years, not only in theatre and performance practices all over the world but also in scholarship.

From this issue on our Artist in Focus section will also alternate with our Scholar in Focus. In 2022, EASTAP nominated the American researcher, theatre director, and author Richard Schechner as an Associate Scholar. We asked Schechner to provide an inside perspective on his research and working process, to give us a glimpse of the work that lies beneath the surface of the printed page. We publish two essays: with ‘Postpone the Great Game’ Schechner opened the EASTAP’s fifth congress on 23 May 2022. The second essay ‘The Crash of Performative Circumstances dates back from 1981 and forms an interesting diptych with ‘Postpone the Great Game’. The essay is more than forty years old, but it reads like a contemporary manifesto. The two essays are further accompanied by a selection of (auto)biographical texts: four poems; a 1978 notebook entry about India; and an excerpt from A Yeers Worth, a piece of ‘non-fiction fiction’, as Schechner describes it himself. In addition to the textual material, this Scholar in Focus section also offers a portfolio from Schechner’s personal archive: a range of diagrams that support his reflections; some photographs from his time in South Asia; and a few drawings that serve as observations of what moves around him.

From the Archives Section deals with censorship in Portuguese theatre during the long period of dictatorship (1926-1974). Central is the Teatro Experimental de Cascais: most of their performances were supervised by specific services of the regime (National Propaganda Secretariat) and controlled not only on the level of texts but also of performances. Nonetheless Teatro Experimental de Cascais succeeded in presenting daring shows as Jack Gelber’s The Apple, Arrabal’s Fando and Lis and Genet’s The Maids. As always, this section is presented alongside many traces from the archives (letters, reports and pictures.)

Issue 5 will be published here by the end of January 2023. So stay tuned! 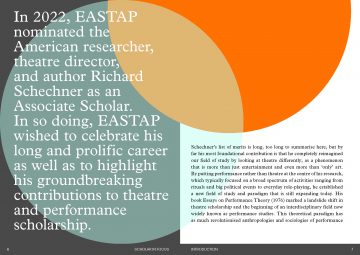